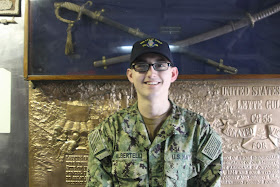 Navy Seaman Apprentice Jack Albertelli, currently serving for one year, is a cryptologic technician (technical) who assists in supporting the anti-ship missile defense.

When asked why he joined the Navy, Albertilli said,"  To gain experience and further my professional development."

USS Leyte Gulf is a Ticonderoga-class guided missile cruiser in the United States Navy. She was named after the location in the Pacific Ocean where two battles between the American fleet and Japanese fleet were fought during World War II.

Leyte Gulf is attached to Commander, 6th Fleet that conducts daily operations, port visits and engages with allies and partners to maintain a forward presence throughout Europe and Africa and improves maritime security.