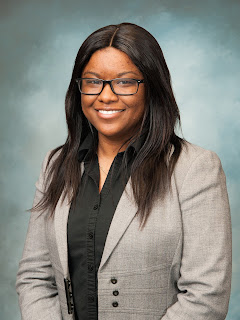 Eure was presented with the IT Rising Star of the Year award for her role as the information systems security manager (ISSM) for the Defense Health Agency (DHA) Enterprise Intelligence and Data Solutions (EIDS) Program Management Office (PMO).

The annual DON IM/IT Excellence Awards recognize projects, teams and individuals that help transform the Navy and Marine Corps through information technology. The IT Rising Star of the Year awardee is recognized for displaying visionary thinking, innovation and superior leadership skills in delivering IT to support the DON's mission.

“I am extremely honored to receive this award, especially so early in my career with SSC Atlantic,” said Eure. “It has been a thrilling experience to be able to deliver impactful results in such a short timeframe supporting the DHA EIDS PMO. I could not have done it without the support of the integrated product team, my cyber team, and fellow ‘SPAWARRIORS,’ to include my mentor Sean Perryman.”

Eure leads and mentors her staff of 11 civilian and contractor information systems security officers and has established regular team mentoring roundtables and ‘Q&A’ forums for her geographically dispersed team.

The DHA EIDS PMO provides seamless data services and decision support for clinicians, patients, beneficiaries, analysts, researchers, and Department of Defense leadership in support of the delivery of health care to service members from battlefield to the homefront.

“Brianeisha’s efforts to document processes, automate administration and improve visibility greatly increased the cyber resilience of the enclave,” said Cole. “And for that we are truly appreciative.”

“Brianeisha graduated from Norfolk State University with both a bachelor's and master's degree.