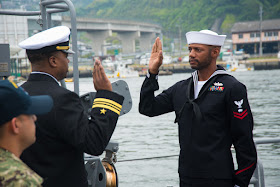 "What I enjoy most about my job is taking taking care of the Sailors and being the one they count on to square away their skills as a deck mineman," he said. "I enjoy teaching junior sailors to lead with integrity and not ego."

When asked what reenlisting in the Navy means to him, Sims-Faulk said, "The Navy gives me a direct way to honor and serve my country which is what I wanted. I have also strengthened a set of personal skills that I can take with me long after my time in the military is over, so I am grateful for that. Reenlisting on a Japanese ship was my way to give a respectable contribution towards positively impacting US and Japanese relations. What better way to show gratitude to my host country than to reenlist onboard a Japanese military vessel? So that’s what I did."

Lt. Cmdr. Robert Wayland, executive officer of Pioneer, praises Petty Officer Sims for staying in the Navy. "Today was a big win for the Navy," he said. "MN2 Sims, a talented Sailor in the mine warfare force, has decided to stay Navy. Even better, PIONEER's sister ship, the Yakushima, was a terrific setting for the ceremony."

USS Pioneer's mission is to clear the ocean bottom and water volume of anti-ship mines. A combination of stealth, endurance, and the latest mine countermeasures technology allows the PIONEER to conduct sustained, full-spectrum, mine countermeasures operations in the world’s critical maritime regions. A product of intense research and unique construction, the PIONEER plays a vital role in America’s enduring objective to maintain uninterrupted access to the world’s strategic waterways.

Serving in the Navy has made Sims-Faulk a better person both professionally and personally.

"The Navy has had a tremendous effect on my life," he said. "I’ve made friends that have become like family. The morals and values instilled in me from the Navy have made me a stronger person and better man overall."


Sims-Faulk graduated from Alabama State University in 2012 with a degree in computer information systems.

His late father, Styron Faulk, was in born in Inkster, Michigan and his mother, Cynthia Sims-Braxton, in Detroit.